Re-read the third place playoff between Belgium and South Korea.

It’s the final day of the tournament and there’s one game; the biggest game in world football. Re-read how Portugal and Italy reached the World Cup Final. 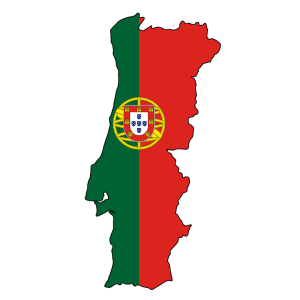 The current European champions take on the four-time winners on a warm, windy day in Moscow. The last three World Cup Finals have required extra time to settle the argument, with the previous two seeing no goals scored in normal time. The Final follows the pattern of the last two, with neither side able to find a goal. Ten minutes into extra time, there’s a goal; Portugal’s talisman Cristiano Ronaldo puts the European champions twenty minutes away from their first ever World Cup and the completion of a European/World Cup double. Italy go in desperate search of an equaliser and get one with eight minutes to go as Andrea Belotti pulls the Italians level. The seconds and minutes tick away and it’s going to penalties, something that the Italians have fond memories of from the 2006 World Cup Final. 120 minutes are on the clock and the referee is checking his watch. Italy have one final chance to win the game without requiring penalties and it falls to Belotti. He scores! In the final minute of extra time! Portuguese players slump to the floor, whilst the Italian team pile on to Belotti as the bench erupts. The game kicks off after fairly lengthy Italian celebrations, but Portugal have no chance to equalise and force penalties. Italy are champions of the world for the fifth time.

There are no games today, so lets take a look at how Portugal have reached the final:

Find out what happens on Day 29.

Re-read the Quarter Final matches for Portugal and Belgium.

The opening Semi Final pits a team full of attacking players in Belgium against a team in Portugal with arguably Europe’s best ever player in Cristiano Ronaldo. It’s a big game for both nations, with neither having ever reached the final before. Nerves at this stage of the tournament are to be expected and it’s a relatively slow start. Danilo Pereira limps off injured for Portugal in the 39th minute, forcing them to make a change. The change instantly results in a goal – Joao Mario breaks the deadlock in the 40th minute to put Portugal into the lead. As the game progresses, Belgium’s urgency becomes greater. With ten minutes to go, Ronaldo ensures that the game is wrapped up for Portugal and that they will get the chance to play for the biggest prize in football. 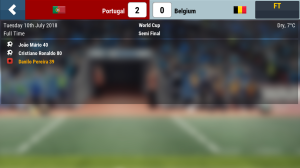 Find out what happens on Day 27.

Recap on the previous day of games.

Re-read how the teams won their Last 16 matches.

It would have been a brave person who bet on the opening Quarter Final match being between South Korea and Ukraine. Victory over Denmark secured Ukraine’s place, whilst South Korea pulled off one of the biggest shocks in World Cup history by beating Brazil. Hyun-Jun Kang goes off injured for the South Koreans in the 33rd minute. If it has an impact on them, it’s not a negative one – Sung-Yeung Ki puts them into the lead five minutes later, a lead they take into the break. They keep the lead throughout the second half, but are unable to add to it, so Ukraine are always in the game but unable to find a goal.

Iceland were surprise Quarter Finalists at Euro 2016, whilst Portugal were surprise winners. The two meet in the Quarter Finals of the World Cup after Portugal beat Colombia and Iceland beat Russia in the Last 16. Birkir Bjarnason puts Iceland into the lead in the 18th minute. The score remains 1-0 at half time and Iceland are half way to claiming another prized scalp. Things don’t get any better for Portugal at the start of the second half as Fabio Coentrao leaves through injury in the 46th minute. Three minutes later, the scores are level; William Carvalho pulls Portugal level. Andre Silva leaves in the 52nd minute, joining Coentrao on the injury list. The third goal of the game comes in the 66th minute and it goes the way of… Portugal. Raphael Guerreiro is the man who puts Portugal into the lead. Atli Hrafn Andrason becomes the third player of the game to be forced off via injury in the 73rd minute as Iceland suffer this time. With time running out and Iceland throwing bodies forward in search of an equaliser, Adrien Silva puts the tie beyond doubt with Portugal’s third in the 86th minute.

Find out what happens on Day 23.

Re-read the final matches in Group C and D.

After topping Group D, Colombia find themselves taking on Portugal in the Last 16. The first half is relatively quiet, although Portugal lose Joao Moutinho to injury in the 39th minute. The second half also produces no goals, so it’s the first game of the tournament to go to extra time. Andre Silva provides the breakthrough in the 100th minute and it’s enough for Portugal to progress through to the Quarter Finals. 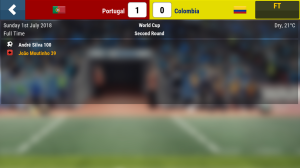 Find out what happens on Day 18.

Check out how accurate my predictions for the Last 16 were.

Neither team have been at their best so far, but I think France are the better team and will beat Argentina.

Uruguay are showing signs of growing into the tournament and are favourites, but Portugal are very different to beat and in Ronaldo, have a player who can turn a game in a moment. I think Uruguay will progress in extra time.

Home support has undoubtedly helped Russia, but they struggled in their first big test of the tournament and I think Spain will be too strong for them.

Croatia impressively topped a tough looking Group D and I expect them to advance against a Denmark side that progressed as expected.

A tough Last 16 draw for Mexico, but also for Brazil; Mexico beat the 2014 champions in the group and if they play like that again, Brazil could exit the tournament much earlier than expected. However, I expect Brazil to have too much for Mexico.

Group H was an open group and Japan were able to qualify from it. I predict they won’t advance any further and Belgium will record a comfortable win.

Sweden qualified from the tough Group F as winners and should not be underestimated, while Switzerland gained a credible draw against Brazil in Group E. A match that I predict will go to penalties, with Switzerland progressing.

Any joy for England about being in the ‘easier’ side of the draw seems premature, with Colombia posing a stern test. Colombia’s loss in the group stages was a 2-1 loss in a game in which they played with 10 men for 87 minutes. It may require extra time, but I think England will progress.

Recap on the previous games in Group C and Group D.

Going into the final matches, the table looks like:

It’s a similar situation to Group A; Portugal are topping the group, but wins for Ghana and Ukraine could see them qualify at Portugal’s expense. Ukraine are in the stronger position out of Ukraine and Ghana, but Ukraine have to play the table-topping Portugal whilst Ghana play bottom side USA. However, Portugal’s big goal difference means they are unlikely to miss out on qualification without at least one (but more likely both) of Ghana and Ukraine recording a big win. A win for Portugal and USA could still see the Americans qualify though…

USA lose Erik Palmer-Brown to injury in the sixteenth minute. One minute later, Ukraine take the lead against Portugal to make Ghana’s task (or USA’s unlikely task) more difficult – Ivan Ordets is the scorer. Ghana’s task becomes more difficult in the 38th minute when USA take the lead through Danny Williams. On the stroke of half time, Andriy Yarmolenko doubles Ukraine’s lead. At half time, USA lead Ghana 1-0 and Ukraine lead Portugal 2-0 – it looks as though qualification from the group is all but settled. America lose Geoff Cameron to injury in the 51st minute, with Michael Bradley being forced to follow him off one minute later as USA complete their permitted substitutions with all substitutes replacing injured players. Ukraine hit a purple patch with three goals (Volodmyr Shepelev in the 61st and 69th minute and Andriy Yarmolenko in the 69th minute) in eight minutes, propelling them to the top of the table and putting Portugal’s qualification in some doubt if a sizeable win can be recorded by Ghana. USA double their lead in the 70th minute and are given a boost two minutes later when Bernand Mensah receives his marching orders. Ghana are able to pull a goal back in the 77th minute through Maxwell Acosty, but it’s too little too late. 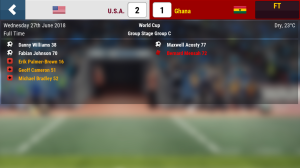 Portugal have qualified from the group as runners-up after their sizeable loss against eventual winners Ukraine, whilst Ghana and USA were three points away from the two qualifiers.

Going into the final matches, the table looks like:

Denmark have qualified with a game to spare and only need a point against Colombia to finish as group winners. A point for Colombia will see them qualify, whilst a win will see them top the group. If Denmark can beat Colombia and Saudi Arabia can beat South Africa, Saudi Arabia could sneak into second spot if there’s a big result in either game.

Saudi Arabia’s job becomes more difficult in the 31st minute when Keletso Shipalane puts South Africa into the lead in 31st minute. Saudi Arabia’s job looks to become impossible in the 34th minute when Siphiwe Tshabalala doubles South Africa’s lead. In the other game, James Rodriguez limps off for Colombia in the 36th minute. The referee’s blow their whistles for half time with Denmark and Colombia drawing 0-0 and South Africa beating Saudi Arabia 2-0. Although Saudi Arabia need Denmark to beat Colombia if they are to have a chance of qualifying, they also need goals and to record a win. They start the second half well as Mohammed Al-Shalhoob pulls a goal back in the 48th minute. Colombia take the lead over Denmark on the hour through Juan Fernando Qunitero. News evidently filters through to the other game and South Africa add their third after 65 minutes through Thabo Dykman. With the question of who will qualify from the group surely beyond doubt, all focus is on the Danish game to see if they can find a way to top the group. Denmark’s quest receives a boost in the 77th minute when Fredy Guarin’s red card sees Colombia reduced to ten men. Luis Muriel is forced off injured in the 80th minute, but Denmark are unable to find an equalising goal. 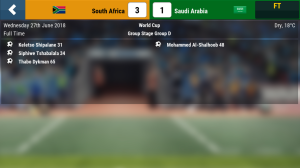 Colombia and Denmark have secured qualification quite comfortably, which most neutrals would have expected. Saudi Arabia’s surprise draw in their opening match against Colombia gave them an outside chance of qualifying going into the final group games, but a loss to an already eliminated South Africa resulted in them finishing bottom of the group.

Find out what happens on Day 14.

What I’ve blogged about

Delve into the archives

My 5 most recent posts

The 5 most recent comments I have received